Tilapia - A Basic Intro to the Different Generic Classifications 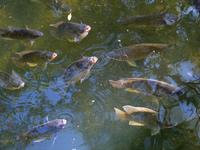 When it comes to tilapia, there are mouthbrooders and substrate spawners. Within the mouthbrooding tilapia, there are several differences in terms of who (male, female or both) takes care of the eggs and fry. Tilapia (meaning the entire tilapiine cichlid tribe) are currently divided into three main generic (genus) groups according to their mode of reproduction (Tilapia, Oreochromis and Sarotherodon). This method of classification has changed numerous times throughout recent history and is still heavily debated. Making it even more confusing, hybridization between species is common, and it is even possible between the generic groups in some cases. This further muddies the waters when it comes to proper classification of the nearly one hundred currently named tilapia species. However, here is the current situation below.

Substrate Spawners (Tilapia genus) - Males and females of the Tilapia genus build and defend the nest together. They aggressively protect the fertilized eggs and freshly hatched fry. Courtship can take up to a week in some circumstances, but a couple of days is more common. It is also fairly common for fish of the Tilapia genus to form bonded mating pairs, though they can also be indiscriminate breeders as well. Tilapia Rendalli and Tilapia Zillii are the two most popular commercially grown substrate spawners.

Maternal Mouthbrooders (Oreochromis genus) - Males will claim a "nesting area" and guard it aggressively from intruders. If a substrate (rocks, mud, etc.) is present the male will dig a round pit several inches deep. If no substrate is present, the male will simply claim an area as his nest. The male will then wait for a spawn ready female to visit. The female lays her eggs in a suitable male's pit (nest), the male then fertilizes them and the female gathers them up into her mouth (buccal cavity) to incubate for 7-14 days. The male promptly chases the female from his nest following spawning and awaits another willing female to visit his nest. Courtship is most often mere minutes, though it can occasionally last up to several hours to perhaps a day. The female does not eat any food during this 7-14 day incubation period (which is one of the primary reasons why females of the Oreochromis genus grow slower than males). She will release the fry once they are ready to swim freely. For a few more days, she will protect them, and the fry will swim back into her mouth if frightened. Some females are more inclined to protect fry after release than others. Some will simply abandon them following release and go off looking for something to eat. Oreochromis are the most widely cultured tilapia in the world. The most popular are Nile Tilapia (O. Niloticus), Blue Tilapia (O. Aureus) and Mozambique Tilapia (O. Mossambicus) in that order.

Biparental Mouthbrooders (Sarotherodon Galilaeus) - Spawning behavior is very similar to Oreochromis, except both parents will brood the eggs and defend the hatched fry.

terratecnica, CraigSS, HOW and 1 other reacted to this
Sign in to follow this
Followers 1
Go to articles